Skilled Labor Shortage: Builders Gear Up for a Changing Workforce 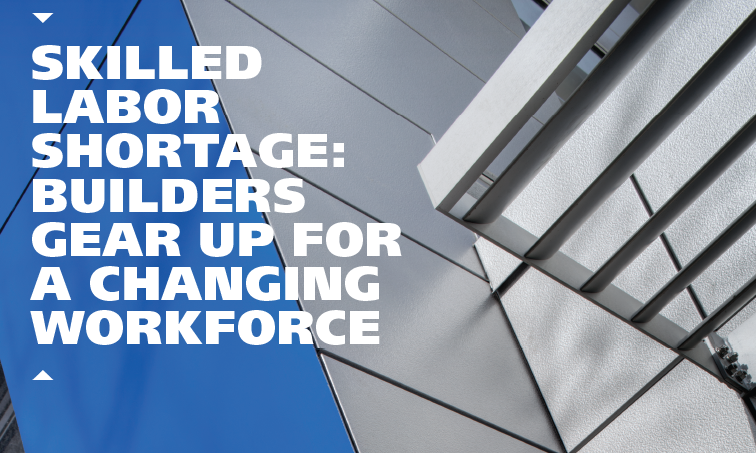 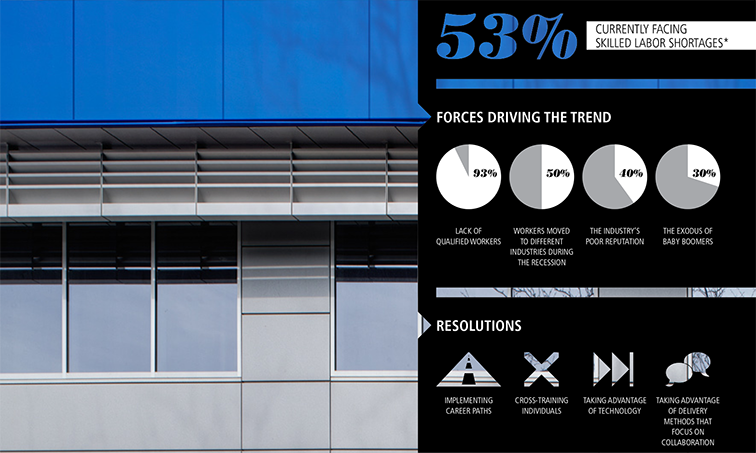 The Great Recession is fading into the past, and construction is on the upswing. But many industry leaders have found they can’t simply pick up where they left off. An estimated 2 million jobs were lost to the economy, and that’s a tough blow. Even if the jobs come back, many of the best workers are gone forever. Companies must find creative solutions to address the skilled labor shortage, or projects will be delayed and more expensive. The savvy ones are already doing just that.

Tracking the numbers is FMI, one of the leading providers of management consulting, research and investment banking to the engineering and construction industry. According to its “2013 U.S. Construction Industry Talent Development Report,” which surveyed thousands of construction firms nationwide, 53 percent of the respondents said they were facing skilled labor shortages, 27 percent said they were not, and 10 percent said “not applicable.”

“In terms of the construction trades, it takes a long time to train workers like pipe fitters, welders and electricians,” she said. “Successful companies have instituted comprehensive career development paths, in-house training programs and are cross-training people to do more than one job. The ones who let people go during the recession and now have to fill key positions are going to be in a real crunch. In the oil and gas sector, for example, many firms are confronted with a chronic shortage of engineers, project managers and skilled tradesmen.”

He continued: The recession hit hard for three or four years, with some trades reporting up to 50 percent unemployment. People lost their benefits, homes and farms after not working for a couple of years. The U.S. Department of Labor, which controls the number and timing of apprenticeships, closed them off.

“It doesn’t make sense to train people if we don’t have jobs for them,” he said.

Now that the industry is recovering, apprenticeships are opening up, and demand is high. Three years ago, when the council was allowed to offer 300 spots, 4,000 people applied. Applicants represent a cross-section of ages and backgrounds, and many have earned college degrees.

“We’ll have no problem replacing Baby Boomers,” he said. “There is a steady stream of apprentices coming to fill those gaps.”

Villanova envisions a bright future, considering the projects coming down the pike. Among them, Wolf Point and the McCormick Place expansion represent several years of work. “These jobs have longevity,” he said.

At The Hill Group, a Franklin Park-based mechanical contracting firm, the sentiments are mixed. President Jim Hill and Director of Technology Integration David Pikey agree there’s no current shortage. But they are keenly aware the workforce is evolving.

“Our biggest hurdle in the next five years is making sure we have the right people to fill the jobs,” said Hill.

“Many unions are top-heavy at this point,” said Pikey. “That’s not the same as saying there is a shortage, but the demographics are not positive. We’d love for that age distribution to flip toward younger workers.”

Those younger workers are harder to find these days. Parents in recent decades have steered their children toward professions, not trades. Most adolescents and young adults prefer computer work over physical labor. However, that tide could turn as recent college graduates with huge loan debt realize they can’t make the same money in their chosen field as a union plumber.

“It feels like it is changing, we are seeing more apprentices taking the opportunity as a career and not a job,” said Hill.

The demographic challenges are spurring companies to seek myriad innovations that help them perform better with fewer resources. Some have adopted philosophies and processes like Lean Construction, Lean Manufacturing and Integrated Project Delivery, which promote collaboration and time- and cost-efficiencies. Others have turned to labor-saving prefabrication and modular construction to build components as simple as a wall or as complex as a complete mechanical system. Many are harnessing the power of technology, both in-house and on the job site; they are implementing software, hand-held devices, automation, robotics, virtual construction and more as rapidly as new uses and refinements are developed.

Technology not only is readily accepted by the existing workforce, but it also could help attract a younger one, said Pikey.

“One of the things we’ve done here, and what most construction companies are doing, is work hard to use technologies to create efficiencies and safe conditions in the daily process,” he said. Using iPad’s, virtual construction, and other advanced construction technologies on the jobsite creates a more attractive environment.”

In Hill’s view, the recession was an opportunity as much as it was a challenge. “It gave us time to become more efficient internally and stretched our abilities to construct virtually,” he said.  “A down market provides tremendous motivation to be more competitive and keep our people working. We think leveraging technology provides us this ability.”

FMI’s Hoover noted that while much progress is being made, greater steps must be taken to preserve the institutional knowledge of retiring workers and to stimulate younger workers and make them feel valued.

“The labor shortage and recession combined has forced companies to take a fresh look at how they build talent pipelines, develop leadership succession plans and build competency. Industry leaders are integrating their HR objectives with core business functions and tying them directly to strategic goals.”