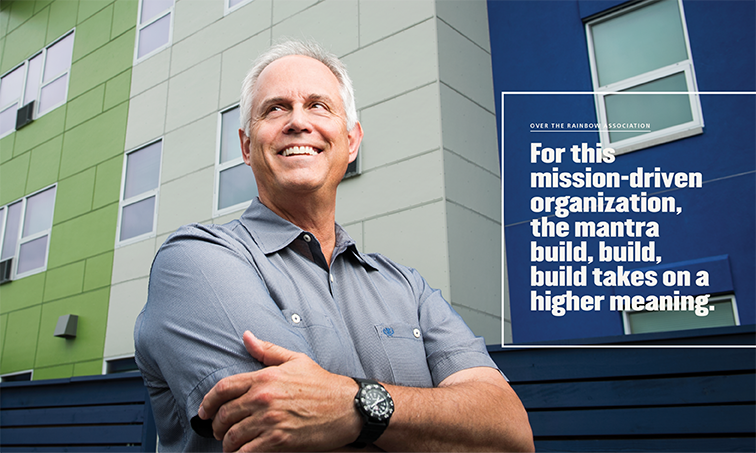 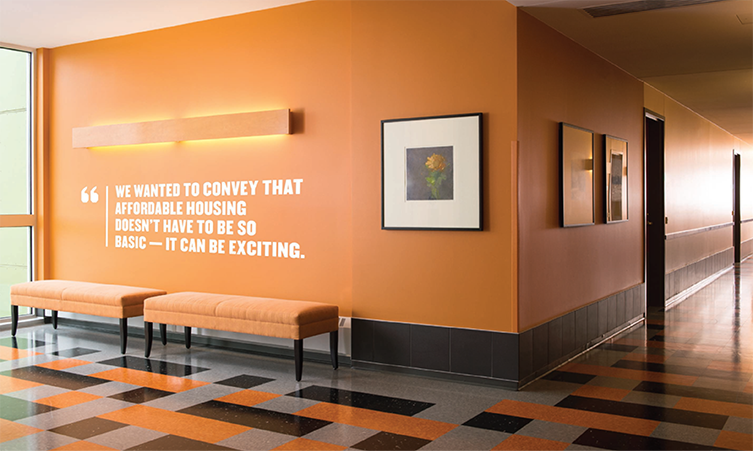 In 1995, a young Evanston man was driving home from work when he swerved to avoid hitting a deer, crashed, and was left completely paralyzed. After a lengthy rehabilitation he moved in with his elderly mother.  When she died, his home became his biggest challenge. Without assistance from another person, he was unable to do many of the things he once could—including leaving his own house.

According to Eric Huffman, executive director of Over the Rainbow Association, adults with mobility impairments who don’t have other options are spending thousands of dollars to retrofit their own apartments or condos. They still live with their parents, or they move into nursing homes at a young age because there is nowhere else to live. The supply of independent and accessible housing is just too scarce.

“The need is enormous. I kind of feel like, if you build it they will come,” Huffman said.

That’s the non-profit’s ambitious vision: To be a leading provider of affordable, barrier-free housing solutions for people with physical disabilities. Over The Rainbow  is moving toward that reality by building dynamic teams with the entrepreneurial vigor to drive social good.

“We‘ve provided a home for people who didn’t have a real home before,” Huffman said. “We are approaching 300 units at this point, so that’s 300 people who wouldn’t have a home, and the dignity attached to that, without us.”

With the help of many, Huffman and his team have built nine apartment buildings in the Chicago area, from Freeport to the west, east to Waukegan and south to Matteson. Every development exceeds ADA compliance. Limited carpet to better accommodate wheelchairs, large roll-in showers, drop-in cook tops, wall-mounted oven ranges, precisely positioned kitchen sinks and easy-to-open custom windows are just a few of the features that empower people with mobility impairments to be more independent.

An Opportunity to Be Bold

Southwick Place opened in July 2015 and has 40 units, including two-bed, one-bed and studio apartments. When it is full, it will provide housing for about 60 people, many of whom, like the young man from Evanston, are coming from emergency conditions. Huffman knew that creativity would be the driving force to make this project different and successful.

“We really wanted to make a statement by pushing the boundaries from a design and construction standpoint. We wanted to convey that affordable housing doesn’t have to be so basic – it can be exciting,” said Huffman.

The building takes on a geometrical form with an angled roof system, and the façade is a vibrant combination of color and materials, connected by a floor-to-ceiling glass vestibule that allows sunlight to enter each floor. The wood truss system, according to project architect Dennis Langley of Weese Langely Weese, expanded the limits of what was possible.

Being bold didn’t come without challenges, especially when construction began in September 2014 instead of July because of a delayed closing. Everyone had been closely communicating, questioning possible solutions to ensure expectations were clear and challenges were curbed as much as possible, but nothing could hold off Chicago’s harsh winter from breathing down their necks.

The main issue was the roof, a modern design that resembles butterfly wings. Given the new schedule, Skender figured it would go down around Christmas—the worst time of year to put on a roof in Chicago.

“Our team looked at alternatives and quickly set up a meeting with the owner, architect, the roofing manufacturer and roofing subcontractor to discuss options,” said project manager Brian Skender. Ultimately, the team chose a roof system that can be installed in temperatures 10 degrees colder than a typical system. The result not only allowed OTR to stay on schedule, but also cost less than the original product.

With Skender’s guidance, Southwick changed from a four-story building to a three-story one without compromising the program. The team cut a significant amount from the total cost of the project by creating landform features with excess dirt as opposed to paying to have it hauled away. They considered the value of masonry versus other materials for potential cost savings. They carried out true value engineering and completed construction in nine months.

It would have been very easy for things to go awry had the team not agreed to leave their egos at the door, said Skender.

“No one had an agenda, and everyone was highly motivated to get our tasks done in an honest and upfront style. We developed this give and take relationship where no one wanted to fail because we all knew we were building something that would give others a sense of dignity and independence,” he said.

“This was a true ongoing professional relationship where Skender was able to identify what was driving the costs within the project and methods that were more affordable, which allowed everyone to make the best decisions,” Langley said.

For its tenants, Southwick offers valuable design features, but more importantly, it offers a real home.

“The focus was always what is best for the tenants. There’s nothing in there that we didn’t want,” Langley said of the Southwick project.