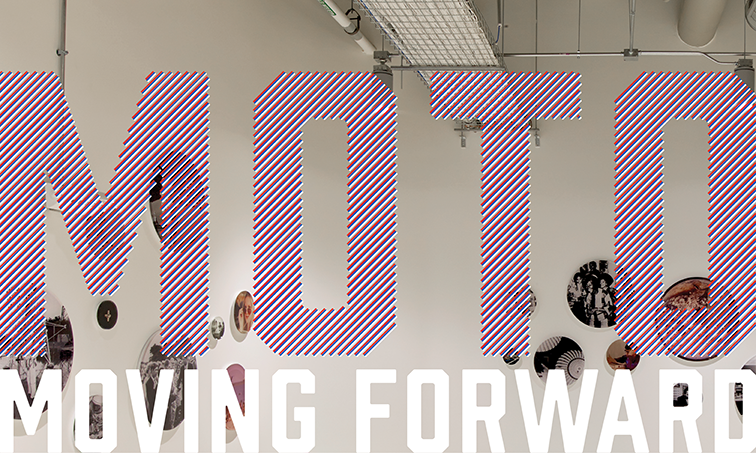 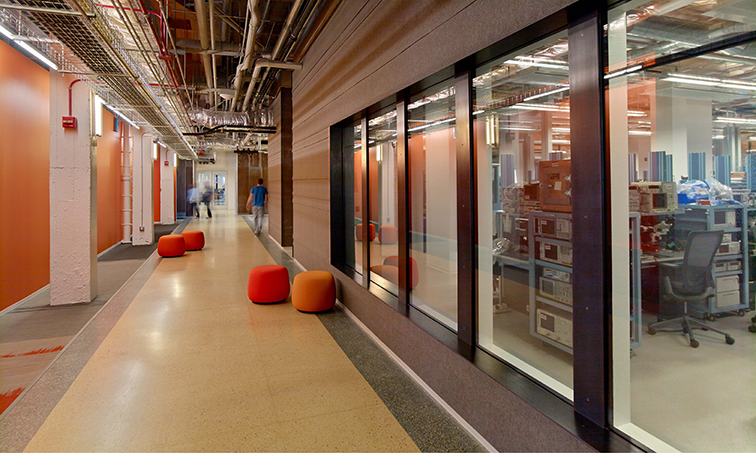 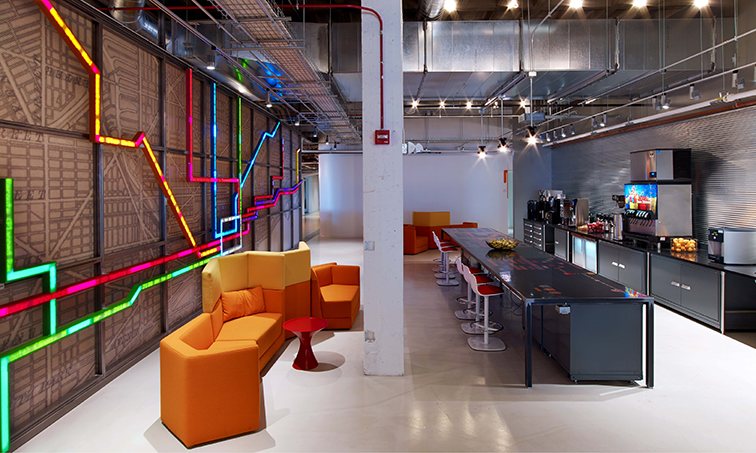 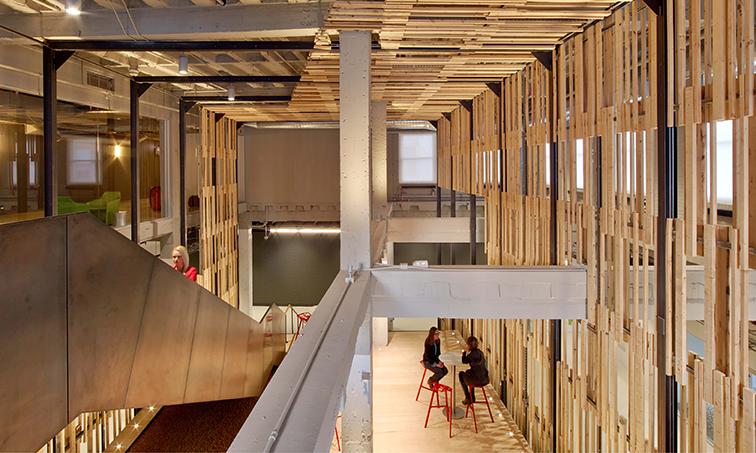 It was the largest tenant build-out the city has seen in at least a decade: The Motorola Mobility global headquarters relocation to Chicago’s historic Merchandise Mart. Leasing 600,000 square feet on four floors, Moto’s new space has been likened to a 25-story high-rise turned on its side. But the massive adaptive re-use project constituted much more than fields of offices and workstations: It incorporated seven highly sophisticated research and development mega-laboratories, powerful new rooftop mechanicals, a grand architectural staircase and the services of two helicopters—all in 45 weeks.

As home to the renowned international telecommunications company, formerly in suburban Libertyville, the new headquarters spans floors 16 through 19 of the circa 1930 Art Deco landmark building. The labs, which are on the upper three floors, occupy about 80,000 square feet of the interior, and the two structures housing their dedicated mechanical systems cover an additional 50,000 square feet on the rooftop.

“The floor plates are so massive, we had to create an interior campus defined by various neighborhoods, paths and nodes, so that the employees could easily navigate through the space,” said Ingrida Martinkus, one of the project architects at Gensler. “The labs are the anchoring elements around which offices, meeting/huddle rooms and open workstations are organized. Corridors wrap and transverse the floors, with micro-kitchens and various ancillary spaces interspersed along the way, allowing for moments of expected, and unexpected collaboration.”

Among the most striking design features of the new headquarters are a trailer-sized LED wall and a monumental steel staircase linking the 18th and 19th floors. The staircase offers platform seating for small group meetings at the mezzanine level, and wooden slats enclose it on three sides. Many of the building’s vintage details such as columns and doors are melded into the new architectural elements.

Before construction could begin, the work had to be organized into a master schedule. The task was challenging in part because many program details were yet to be determined and, therefore, the schematic drawings were incomplete. So in order to get the ball rolling, the project management team engaged trade partners, asked for their input and brought many disciplines together to stay ahead of the planning process.

The lengthy, detailed pre-planning meetings were invaluable, said Martinkus. “Transparency and coordination were key. This allowed the team to identify any and all potential challenges and arrive at solutions before conflicts arose.”

“There were literally thousands of items that had to be completed,” said Dan Marijan, Skender senior superintendent and partner at the firm. “We worked backwards, dealing in milestones. We knew the end date, and that couldn’t be changed. Before that, the furniture had to go in. But before that, the carpet had to go in, and before that, the drywall. And so on.”

Multi-story build-outs like this one typically are phased one floor at a time. But because of the complexity of the labs, they had to be started early and simultaneously. Furthermore, they are located on different floors.

“Once the real estate was set aside for the labs, it was divide and conquer. The labs were the first and most important task that needed to be programmed because all of the major infrastructure was related and required the most amount of time to coordinate and build out,” said Marijan. “Once the real estate was locked down, we began our riser and infrastructure work. We phased the project in 50,000-square-foot batches, and we figured we could start four batches at any given time. Two hundred thousand square feet per floor seems overwhelming, but the way we broke it down was very manageable. For much of the duration, the work progressed not sequentially, but on parallel paths. That’s how we got it done in 45 weeks.”

Skender also took the innovative step of forming teams according to discipline: Separate superintendents and project managers were assigned for the labs, mechanical systems and LEED.

“When specific questions arose, they were directed to that team,” said Marijan. “It became a very fluid process.”

While Motorola was tweaking its program, the project team moved ahead with the infrastructure. The existing systems, according to Andrew Lehrer, ESD vice president, project manager and one of the lead mechanical designers, had to be upgraded to meet the project goals, and new systems had to be installed.

“The labs were stacked fairly vertically, which allowed us to have two central utility platform cores running straight down,” he said. “That made the distribution and infrastructure as efficient as it could be. Once we knew what equipment we needed, we found two spots on the roof to build the raised platforms that would support the equipment. Then we had to figure out how to get all of it up there.”

Building a crane that would hoist dozens of large pieces of equipment and 184 tons of steel to the upper floors didn’t make logistical sense, nor would it fit into the project’s timeframe. So, two helicopters made an unprecedented 180 lifts over a two-day period from a barge floating on the Chicago River. The mechanical contractor built further efficiency into the process by pre-sorting the materials into bundles and making sure each one was balanced before delivering them to the site.

As for the labs, each one is different in size and function as well as design requirements for technology, climate control and acoustics. Exterior walls are variously clad in materials such as wood planking or corrugated metal, and were inspired by the view of Chicago looking north.  They were about 70 percent completed when the client decided two of the larger spaces, encompassing over 20,000 square feet, should be shielded from radio frequency interference to contain cellular signals.

Marijan explained: “The Merchandise Mart is in close proximity to a 911 call center. Everyone was hyper-sensitive to disrupting emergency calls or even being associated with disrupting those calls. A lot of detail had to be ironed out to create these rooms, so there are no errant signals coming from them. The Libertyville location was more forgiving because it was not in close proximity to the same concentration of cell towers or emergency providers.”

“It was a difficult and costly change, but because of the flexibility we had, it was a change the owner could make without derailing or delaying the project,” said Lehrer. “That’s what was most valuable to them.”

Another big change was the decision to not locate Motorola’s manufacturing and production facility within the Merchandise Mart as originally planned. The facility’s miniscule tolerances for vibration, humidification and temperature were too difficult to control in a high-rise environment. Instead, it was moved to a nearby 63,000-square-foot, single-story warehouse, which the project team gutted and outfitted to the proper specifications.

“One of the key things they did, instead of trying to communicate solely by emails and phone calls, was meet with us in Libertyville with their tradesmen. They walked through our facility numerous times instead of only relying on paper layouts,” said Motorola’s Lance Vondrak, director of operations at the facility.

“At the end of the day, what is important to me is that the production lines came up on time,” he said. “We got things right the first time.”

Construction progressed, with as many as 500 tradesmen working on both sites at the same time. Meanwhile, the rest of the 4 million-square-foot Merchandise Mart was operating as usual, with frequent and hugely populated trade shows running through the course of the year.

“It was a stressful time, grinding through the details, but everybody did what they could to make it a lot easier, from the owners to our trade partners,” said Marijan. “Everybody knew we were setting out to create something bigger than themselves, and they were up for the challenge.”

Ultimately, the hard work paid off. The project was complete in 45 weeks, with the new headquarters at the Merchandise Mart earning LEED Platinum Status for corporate interiors.

Lehrer and Martinkus agreed that teamwork was the factor that brought the project to its successful conclusion.

“Value is not always about money,” said Lehrer. “Often, it’s about time. Motorola had a very compressed schedule and a complex project, but it was met effectively because of the team and the process. Everyone was working toward the same goal.”

“It was a collaborative team that challenged people to bring their best ideas and solutions, ultimately creating a creative and healthy work environment for Motorola,” said Martinkus. “This is one of those ‘once-in-a-lifetime projects,’ for which we would all jump at the opportunity to work on again.”

“The toughest challenge was really not the tight schedule, the technicality of the labs or the lifting of steel, but managing the complex matrix of relationships between Motorola and Google at the time. The multiple consultants and the trades were always square and level on all sides of the conversation.  That was the driver for our successful outcome,” he said.