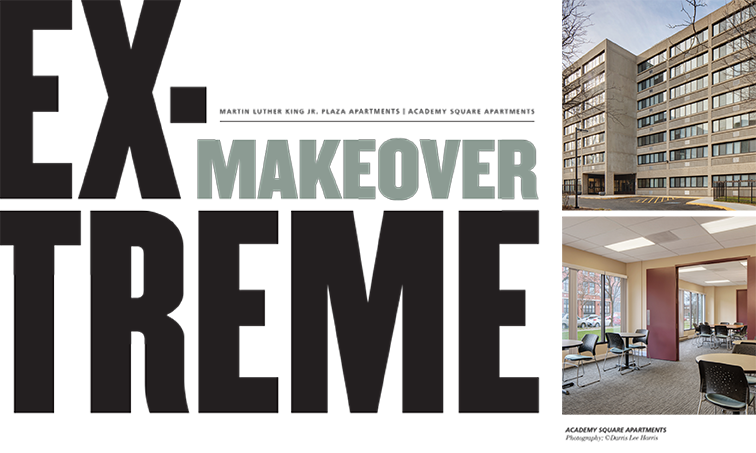 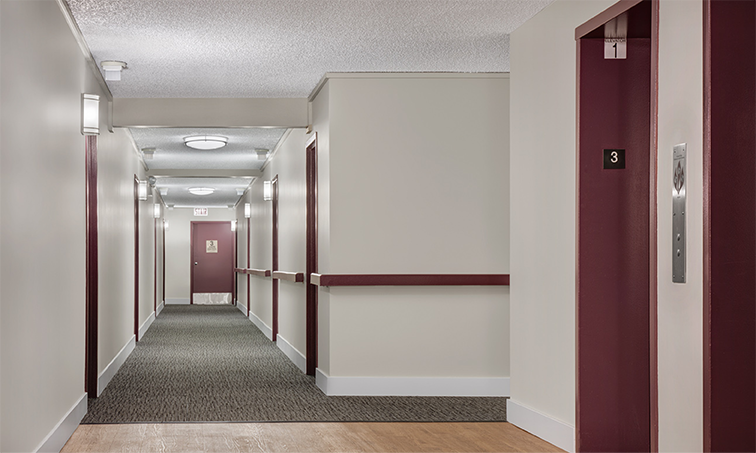 As landlords know, renovating an apartment is an exercise in timing and coordination. But renovating an entire building is more like an Olympic event, especially when it is fully occupied. Skender Construction last summer took on the massive rehabilitation, inside and out, of two circa 1970 rental communities on Chicago’s West Side. Within weeks, hundreds of residents had brand new surroundings to call home.

The communities, both designated for low-income populations, are the Martin Luther King Jr. Plaza Apartments and Academy Square Apartments. They had been recently acquired by separate out-of-state owners who specialize in the preservation of affordable housing buildings. Although the two projects were similar in nature, they also bore remarkable differences. Both were challenging and ultimately rewarding for all who were a part of it.

Key to this accomplishment were meticulous advance planning, frequent and open communication, and a well-defined work schedule, said the Skender project superintendents, Bill Darrah at MLK and Dan Kenny at Academy Square.

The MLK project modernized 138 apartments in an enclave of nine low-rise masonry buildings in East Garfield Park. Between April and August, most kitchens and baths were remodeled with new cabinets, appliances and fixtures. All apartments were outfitted for the first time with air conditioning units, much to the delight of the residents. About 10 percent of the apartments were made partially handicap-accessible. After significant asbestos abatement, the team removed all existing galvanized piping and replaced with copper piping. The buildings were tuck-pointed and re-roofed, and new windows and lintels were installed all around.

Academy Square comprises 200 apartments in five buildings: A 7-story precast concrete tower for seniors and four masonry low-rises for families. The kitchens were gutted and rebuilt, and the baths were substantially remodeled. Heating and air conditioning units were replaced. Common areas were updated with new carpeting, light fixtures and paint; a maintenance room was converted to a library. Exterior renovations included an enhanced security system, new roofs and sidewalks, upgraded lighting, accessible entries and extensive landscaping. The duration of the project was from mid-March through September.

At both locations, the work had to be done with as little disruption to resident life as possible. The solution was to create a schedule that completed an entire apartment renovation in less than a week, and to group the apartments into batches, based on their locations and connection to the building’s infrastructure. The residents were instructed on how to arrange and protect their belongings, so the crews could move about. Then they were temporarily relocated to nearby hotels and paid a stipend for their expenses and inconvenience. Typically, they left on Sunday evenings and returned the following Friday evenings.

“The residents were very concerned at first that we were evicting them and making the community market rate,” said Nick Tufano, director of construction at Preservation Partners Development in Torrance, Calif. An affiliated company purchased Academy Square. “It was imperative that we treat them with the utmost customer service and respect.”

Managing both apartment communities is Chicago-based Evergreen Real Estate Services, LLC. John Noonan is Evergreen’s director of facilities and purchasing; he also served as the MLK owner’s representative during the rehab project.

Noonan credits the herculean efforts and tremendous input of site managers—Althea Collins at MLK and Zenita Monroe at Academy Square—who coordinated the tenant moves in accordance with the construction schedule and insured tenant needs were met. The site managers made sure everyone had a place to go at the prescribed times and received their compensation on a timely basis. They also affirmed the tenants had properly prepared and secured their belongings so the crews could do their jobs. Theirs was a vital role, Noonan said.

Dividing the apartments into batches was an essential strategy. Many renovations can be organized with one trade after another cycling through the building until the project is completed. Not this one.

“At MLK, we needed to shut down all the plumbing in the buildings for at least a couple of days,” Noonan said. “The batches made the job easier in terms of not having to schedule individual entries into apartments because the residents were not there.”

But making the batches logical and efficient took a massive amount of advance planning and collaboration. Skender was given a firm budget and absolute completion dates. That meant finishing between 12 and 20 apartments every five days to meet the deadlines. The project superintendents brought their trade partners and vendors into phase meetings to enlist their ideas and commitments. Each day was carefully planned out: On Mondays, kitchens were gutted. On Tuesdays, the cabinets were installed. Contingency plans for worst-case scenarios were developed. Deliveries were rigidly scheduled—storage and staging space was at a premium. In a few instances, vendors had materials delivered to their warehouses until they were needed at the jobsites.

“We even arranged times,” Darrah said. “The flooring guy came early in the morning, so he could get out of the way and make space for someone else to be right there. Everyone was working in the same place at the same time.”

“We really had to plan our manpower,” said Pat Story, project manager at Bensenville-based Ewing-Doherty Mechanical Inc., the MLK plumbing contractor. “We did whatever it took to get the job done, even if it meant overtime to meet milestones for that day. Most projects are based on weekly or monthly milestones, but because of the huge scope, our milestones were sometimes split up into two- to four-hour segments.”

The tower at Academy Square required special consideration. The water had to be shut off to remove and replace plumbing fixtures, but the building would never be entirely vacated. The batches followed the risers, which serve two apartments on each of six residential floors. Hence, 12 became the batch size. Meanwhile, in the rest of the tower, residents were traversing through the common areas as usual.

“Everybody had to be cognizant of that fact and be extra-cautious to keep the hallways clear,” Kenny said. “The common footwear worn by the residents is knit socks and slippers. We had to be sure no debris or sharp pieces of metal were left on the floor.”

During the first week of construction, a few minor glitches arose, but the crews soon found their rhythm and met all milestones. The MLK team even took off a week for the 4th of July holiday. Then, as summer turned to fall, the work came to an end, and the residents were elated with the results. Many extended to the crews hugs, gratitude and a few tears of joy.

“I had initial trepidation about working with any contractor on a job of this magnitude,” Noonan admitted. “By the end of the project, I had so much trust worked up with Skender and particularly with Bill, and we had a very successful project.

Tufano credits Kenny with the transformation of Academy Square. “It takes a unique personality to oversee these projects,” he said. “You have to keep your cool while dealing with my needs as the property manager as well as the residents’ needs. He carries most of the weight, and he did it beautifully.”

Tufano’s advice to those embarking on similar projects?

“It doesn’t matter how much you plan,” he said. “Things will change. As long as you have a team that is good at problem-solving, you can get through it.”

“Spend more time on planning and coordination prior, and the construction time is less,” Story added. “We do some pretty substantial projects in unbelievable time.”