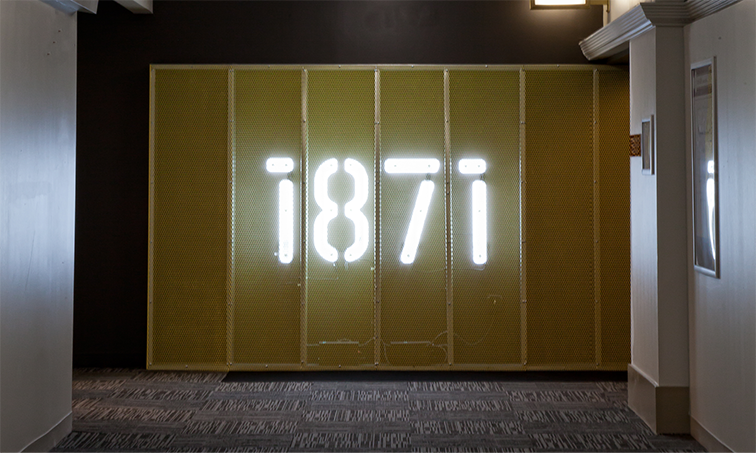 The work at 1871 is never done. Just two years after its launch, Chicago’s largest and most talked-about tech incubator created 1,500 jobs, expanded its physical footprint in The Merchandise Mart and introduced 1871 2.0, a place that reflects the organization’s ever-evolving objectives and desire to constantly keep raising the bar. But innovation, fast growth and results like these don’t happen by chance; they happen when you take time to build a community and when you take the long view (multi-year view) of your goals. Howard Tullman, CEO of 1871 explains.

EL: Nearly everyone in the Chicago business community has heard of 1871. What were you trying to accomplish with 1871 2.0?

Tullman: We were trying to accomplish some things that weren’t part of 1871 initially but which were certainly part of the roadmap. 1871 1.0 was about creating a physical space that assembled a community of startups, incubators, accelerators, universities and venture funds. Now instead of focusing exclusively on building a broad horizontal community, we’re very focused on establishing vertical, domain-specific, clusters as well.

We also wanted to create a space for alumni offices. We didn’t want our success stories leaving, so we built a new area with more identity that would give them the ability to have a distinct place, and yet they could still take advantage of all of the shared resources and opportunities here. We also wanted to make sure our alumni would not incur the costs and the distractions of starting out and worrying about security deposits and furniture because you soon discover that it’s easy to lose sight of their primary mission, which is to keep building their businesses.

The last objective was to bring in out of state venture funds and let them have a presence here in part to meet our companies, and to also act as a launching place for their out of town portfolio companies. Last month we had a dozen companies from Turkey visit for a few weeks; this month we’ll have groups from Israel. So the idea is, if they want to enter the United States global market, 1871 and Chicago are the best jumping off points they can find anywhere.

EL: How has the mission of 1871 evolved since it first launched, and how is the evolution reflected in the design of 1871 2.0?

Tullman: The mission has changed, as I said earlier, because we were initially constructing a community.  In the old days, bragging about how much startups raised was probably appropriate. Today I would say it’s about results. We’re a startup factory, but the factory’s value depends on its output, not its input. What we want is to have people focused on sustainable recurring revenues, real jobs and the creation of companies that are going to last. And so 1871 2.0 is consistent with that up-or-out idea where you’re either growing and expanding and creating a real business or we want you to be doing something else, maybe somewhere else. It’s aspirational—we want people to say, “When I grow larger, I want to have an office over there in 2.0.” That was the intention and part of the design was to make it look not like a frat house or the tech treehouse, but to make it look a little more professional while retaining all the flexibility, the connections, and the fun that we think is always present here.

EL: 1871’s goal from the start was to create jobs, and with the addition of The Bunker, LEAP Innovations and The Good Food Business Accelerator, it’s opening new doors and possibilities for those who don’t always get exposure in the tech industry. Tell us about these initiatives, why they’re important, and what they’ll do for the local economy and the community.

Tullman: I think we have been very successful with job creation. We’ve created around 1500 jobs, our companies have raised about $42 million now and we’ve graduated 70 companies. It’s doing exactly what the Mayor and the Governor asked for and that’s job creation and business creation. Having said that, this year will be very much about new initiatives designed to broaden the scope and broaden the reach of 1871, whether it’s to women or to veterans, or to minorities or to people in certain designated industries.

We’re also focusing heavily on social investing and social entrepreneurship, but there’s no downside or weaker economics associated with the social side of business. Impact Engine, one of our accelerators, is not comprised of non-profit companies; they are for-profit businesses trying to solve important social problems. They’ll have just as much or maybe more economic impact, especially with younger generations who want to buy a product that is connected to a cause or work at a company or get involved with a company that has an intention not to just make money, but to also make a difference. That’s a big part of the 2.0 culture too, because we want to have an impact.

EL: How does cluster development and understanding the assets of a region maximize the value of a large initiative like 1871?

Tullman: I think people didn’t necessarily appreciate that who you bring together and the people you’re building your businesses around (and with) are as important as the physical space. So when we talk about clusters, we talk about lateral learning and lateral learning leads to solutions that work. A lot of value is created in these clusters. It spurs innovation and spurs other people to up their game, and we think that you have to constantly be iterating, constantly be raising the bar, if you really want to create lasting, sustainable value.

EL: 1871 was built on a little of bit of faith. At what point did you and others who helped create this initiative know that it was successful?

Tullman: I don’t think we’re ever successful. We measure progress which is ongoing, not success which is an endpoint, and we’re continuing to progress. This is an arms race; the expectations of customers are always progressive. Miracles today are so-whats six months from now.

I think we knew at the beginning of last year that a change was required, which was roughly when a whole new team came in, and the change was about metrics and accountability and it was about placing a focus on results. And so we’ll know we’re successful when we look back in another three to four years, we’ll have met the Mayor’s objective to have created 10,000 to 20,000 new technology jobs, and many of them will be in The Merchandise Mart. The whole Mart is being transformed from the old Mart of showrooms to the new Mart of technology and there’s probably at least one million square feet here, which are already devoted to technology companies. The good news is The Mart has about 3.5 million square feet of space, so we’ve got some room to expand.

EL: What advice do you give to members at 1871 that would be of interest to our audience?

Tullman: Ultimately talent is great, creativity is great, enthusiasm is great, but hard work and perseverance are what make the difference. We tell them that you can’t be all things to all people, so focus. We also tell them that multi-tasking is a flagrant lie and nobody can be a successful multi-tasker. All you can be doing in that situation is doing a mediocre job at a lot of different things. You have to get your head down, put all of the wood behind one arrowhead, and really focus on what’s important.