Capital One Financial: Reimagining the Way 65 Million Customers Interact With Their Money 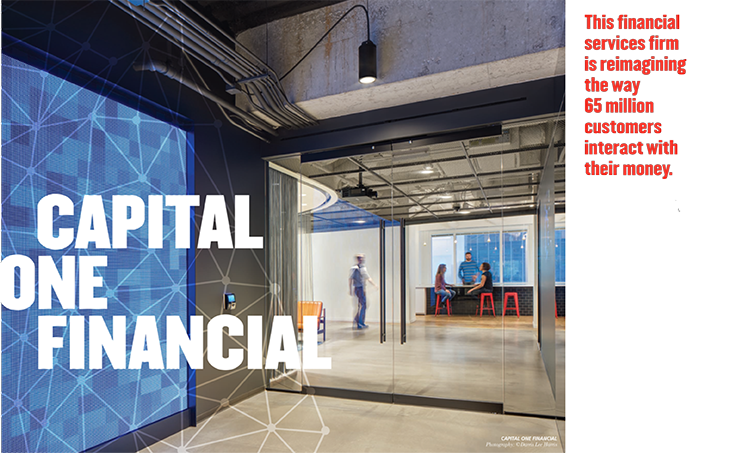 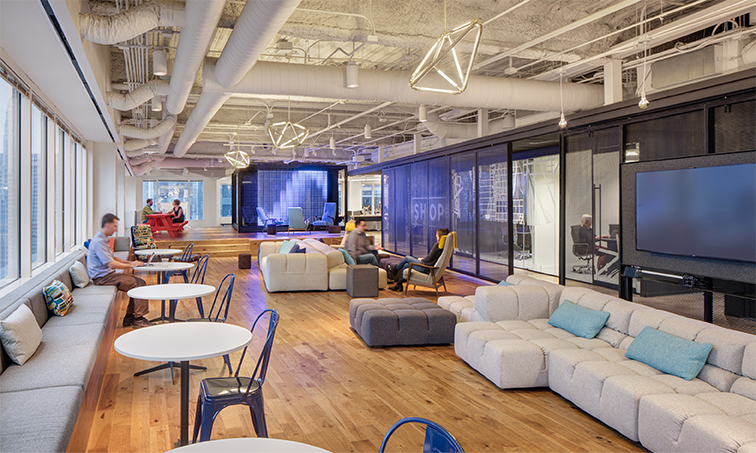 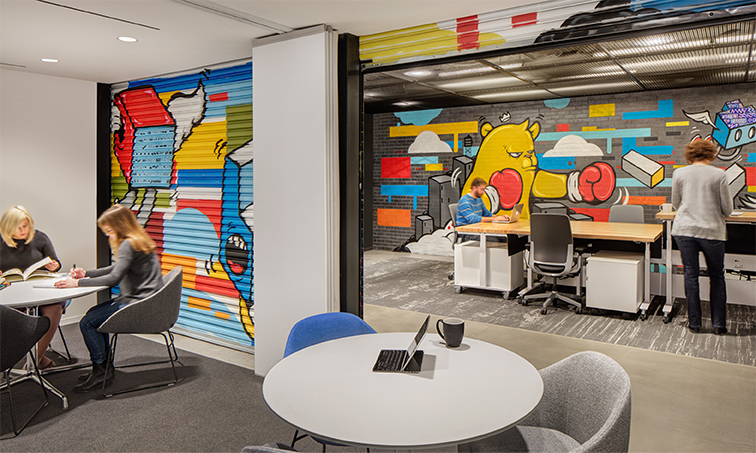 Hannah French, Capital One’s senior manager of design and construction, confesses that people just don’t think banks are exciting. But Capital One is not your average bank.

“We’re a top-ten bank on a journey to become a leading high-tech company and digital innovator,” she said.

French just wrapped up managing the design and construction of The Shop, a dazzling new space for the firm’s partnership credit card business that’s re-branding them as a player in the world of high technology. Designed by Gensler, The Shop occupies the 22nd floor at 77 West Wacker Drive. Teams of developers create innovative and intuitive apps that enhance shopper experiences and drive sales for the company’s private label clients. The 22,000 square foot space is one of industrial chic, with raw concrete floors and graffiti-painted walls.

Making a powerful first impression, the elevators open to a darkened central corridor and an enormous LED light wall. The wall is programmable to stream text and images, such as the corporate logo of a visiting client. Circling the corridor is an open floor plan with one area of function melding into another.

A cheerful, fully-stocked café and coffee bar link to a great multi-purpose space with a raised stage, which can be used for large gatherings, training sessions and celebrations. Tucked everywhere are huddle nooks for all moods, including an indoor garden and a Ferris wheel chair overlooking Lake Michigan. There are labs for conducting consumer research, a mock retail store and a maker space complete with a 3D printer. Floor-to-ceiling windows capture skyline views in all directions.

The Shop was purposely designed to support Design Thinking, the method Capital One’s developers use to build the products and experiences to fulfill their customers’ needs. This human-centered methodology, coupled with a “fail fast” attitude, allows teams to quickly identify, build, and test their way to success. It was also important to attract young talent that might also be drawn to tech giants like Facebook, Yahoo and Google, said French.

“We want people to see our space and say, ‘I want to work here.’”

Capital One has 1,600 employees at 77 West Wacker and the Atrium Corporate Center in Rolling Meadows. The financial services firm entered the Chicago market in 2012 after it acquired HSBC’s U.S. credit card division.

The Shop has about 85 employees, with more being hired in the short- and long-term future. They work in tech teams comprised of six to ten employees with synergistic skills and assigned to various projects. As their assignments are completed, and new ones come in, team members often move around. Certain projects could require more or fewer team members.

The Shop’s creation has measurably transformed the teams into high-performance teams. As an example, product managers previously sat with a line of business serving a particular client. The technology pros were in a different geographic location. Now the product managers are grouped with the tech team, which is comprised of developers, engineers and data analysts. Their closer proximity facilitates communication and feelings of inclusiveness.

In addition to having greater access to each other, team members also interact more efficiently with other Capital One departments. The bank leases four additional floors in the building. Those floors are designed to appear more traditionally corporate.

Bring on the Innovation

The teams are arranged in pods, but they decide how to arrange their individual stations to best accomplish their tasks. Some teams face inward toward each other and some face all in one direction, classroom style.

To make re-configurations possible without re-building and re-wiring the pods every time the teams change, Gensler came up with an innovative idea: Hard-wired, pivoting fences between workstations. The fences easily rotate to supply power no matter where the stations are placed within the pod. (Special permission to use flexible conduit was obtained from city building officials.)

“If a team moves into a corner, they won’t find themselves in a shadow,” he said.

The concept of flexible floor planning is evident throughout the entire floor. Movable dividers are fashioned from imaginative yet practical media: embellished glass, chainmail curtains and even corrugated overhead garage doors.

“One quarter of the floor is dedicated to conference areas, and they are all modular,” said Tim Rogers, Skender senior project manager. “You can cordon spaces off and have smaller conference areas or open the partitions and go from medium to big. They are adjustable to whatever is needed.”